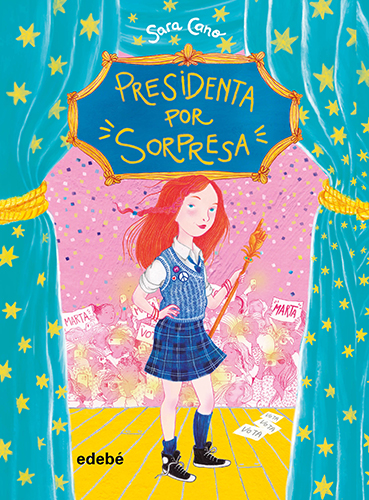 Sara Cano
Shortlisted in the Honour List elaborated by the OEPLI - Organización Espańola para el libro Infantil y Juvenil (IBBY of Spain), 2019
Change the rules!
Marta is a normal 13-year-old girl. She lives in Betulia, a minuscule country where nothing exciting ever happens. She likes normal things for her age (like the band Euphoria and going out with her friends) and politics has always seemed like a total bore to her until one day, in a fight with her arch rival at school, she decides to run for class president.
Hector Ruffian, Jr. is the son of the sinister and corrupt President Ruffian. But the election for class president is at the same time as the national presidential election, and a misunderstanding leads the inhabitants of Betulia, fed up with the same old politicians, to vote in mass for Marta as the country's first president. Girl power!!!
Marta is in shock. Her as president?! But Betulia's laws are very clear on this point: No president can step down without having served for at least 100 days.
Being president is tough, but Marta has two huge allies: Agatha (best friend and Minister of Science and Sparkly Things) and Jeremy, her friend who loves cooking (even though everyone tells him that cooking is for girls). Even though being president won't get her out of having to wear the school uniform!
A novel that breaks cliches, switches up roles, and keeps you laughing.